The Federal Railroad Administration (FRA) and New Jersey Transit Corporation (NJ TRANSIT) are preparing an Environmental Impact Statement (DEIS) to evaluate the Hudson Tunnel Project in accordance with the National Environmental Policy Act (NEPA) of 1969. NEPA is a law that requires federal agencies to evaluate the impacts on the human and natural environment of projects they may approve or fund. The EIS will also contain a Programmatic Agreement prepared in compliance with Section 106 of the National Historic Preservation Act, a law that requires consideration of cultural, historic, and archaeological impacts. NJ TRANSIT and Port Authority of New York and New Jersey (PANYNJ) are joint lead agencies in the development of the EIS

The Project is intended to preserve the current functionality of the Northeast Corridor’s (NEC) Hudson River rail crossing between New Jersey and New York and strengthen the resiliency of the NEC. The Preferred Alternative is the alternative that FRA and NJ TRANSIT have identified as best meeting the Project’s purpose and need. The Preferred Alternative would consist of construction of a new rail tunnel beneath the Hudson River, including tracks and other railroad infrastructure in New Jersey and New York connecting the new rail tunnel to the existing NEC, and rehabilitation of the existing NEC tunnel beneath the Hudson River, referred to as the North River Tunnel.

The North River Tunnel is used by Amtrak for intercity passenger rail service and by NJ TRANSIT for commuter rail service. The approach to the tunnel begins east of NJ TRANSIT’s Frank R. Lautenberg Station in Secaucus, NJ (which is 5 miles east of Amtrak and NJ TRANSIT’s Newark Penn Station). East of the Secaucus station, the NEC has two tracks that approach the tunnel on a raised embankment through the towns of Secaucus and North Bergen, NJ. Tracks enter a tunnel portal in North Bergen, passing beneath Union City and Weehawken, NJ and the Hudson River before emerging within the Penn Station New York (PSNY) rail complex in New York City. The tunnel has two separate tubes, each accommodating a single track for electrically powered trains, and extends approximately 2.5 miles from the tunnel portal in North Bergen to PSNY. The existing North River Tunnel is a critical NEC asset and is the only intercity passenger rail crossing into New York City from New Jersey and areas west and south.

Service reliability throughout the tunnel has been compromised because of the damage to tunnel components caused by Superstorm Sandy, which inundated both tubes in the North River Tunnel with seawater in October 2012, resulting in the cancellation of all Amtrak and NJ TRANSIT service into

New York City for five days. While the tunnel was restored to service and is now safe for travel, chlorides from the seawater remain in the tunnel’s concrete liner and bench walls, causing ongoing damage to various tunnel components and systems.

The damage caused by Superstorm Sandy is compounded by the tunnel’s age and the intensity of its current use (operating at full peak period capacity to meet current demands). While safe for use, frequent maintenance is required but is disruptive to the users of the tunnel.

The purpose of the Project is: to preserve the current functionality of Amtrak’s NEC service and NJ TRANSIT’s commuter rail service between New Jersey and Penn Station New York (PSNY) by repairing the existing North River Tunnel; and to strengthen the NEC’s resiliency to support reliable rail service by providing redundant capability under the Hudson River for Amtrak and NJ TRANSIT NEC trains. These improvements must be achieved while maintaining uninterrupted commuter and intercity rail service.

The Preferred Alternative identifies a specific alignment that includes two new tracks extending from the Northeast Corridor in Secaucus, NJ, continuing in a tunnel beneath the Palisades and beneath the Hudson River. From there, it will connect to the existing approach tracks that lead into New York’s Penn Station. The recommendation also includes the rehabilitation of the existing North River Tunnel once the new tunnel is complete. The new tunnel would be constructed first so that upon completion, trains could be diverted from the existing tunnel to allow its rehabilitation. When the rehabilitation is complete, both the existing and new tunnels would be in service, providing redundant capability and increased operational flexibility for Amtrak and NJ TRANSIT.

The Notice of Intent announcing the preparation of an EIS for this project as well as the initiation of scoping was published in the Federal Register on May 2, 2016. A scoping document was made available online and in repositories within the study area.

November 2016. The two meetings—on November 10th and November 17th in Secaucus, NJ and New York City, NY, respectively—were an opportunity for the public and stakeholders to learn and ask questions about the project developments and the Preferred Alternative. No formal presentations were given.

FRA is currently working with NJ TRANSIT, the PANYNJ, and with cooperating and participating agencies in the project to prepare a Final EIS. Additionally, FRA continues to consult with stakeholders to finalize the Programmatic Agreement in compliance with Section 106 of the National Historic Preservation Act. The final Programmatic Agreement will be made available to the public with the Final EIS. 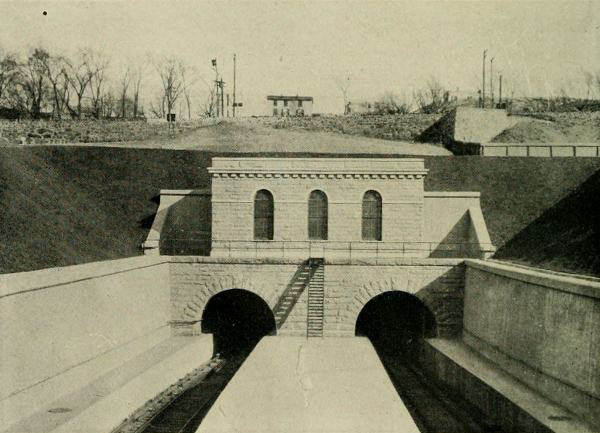 The existing tunnel portal was constructed in 1910. Source: Edward Hungerford